Welcome back to Part Two – The  Sheffield Years
It was the summer of 1993 when Team GB and Sheffield head coach Coach Alex Dampier invited Tim to join his Sheffield Steelers team. 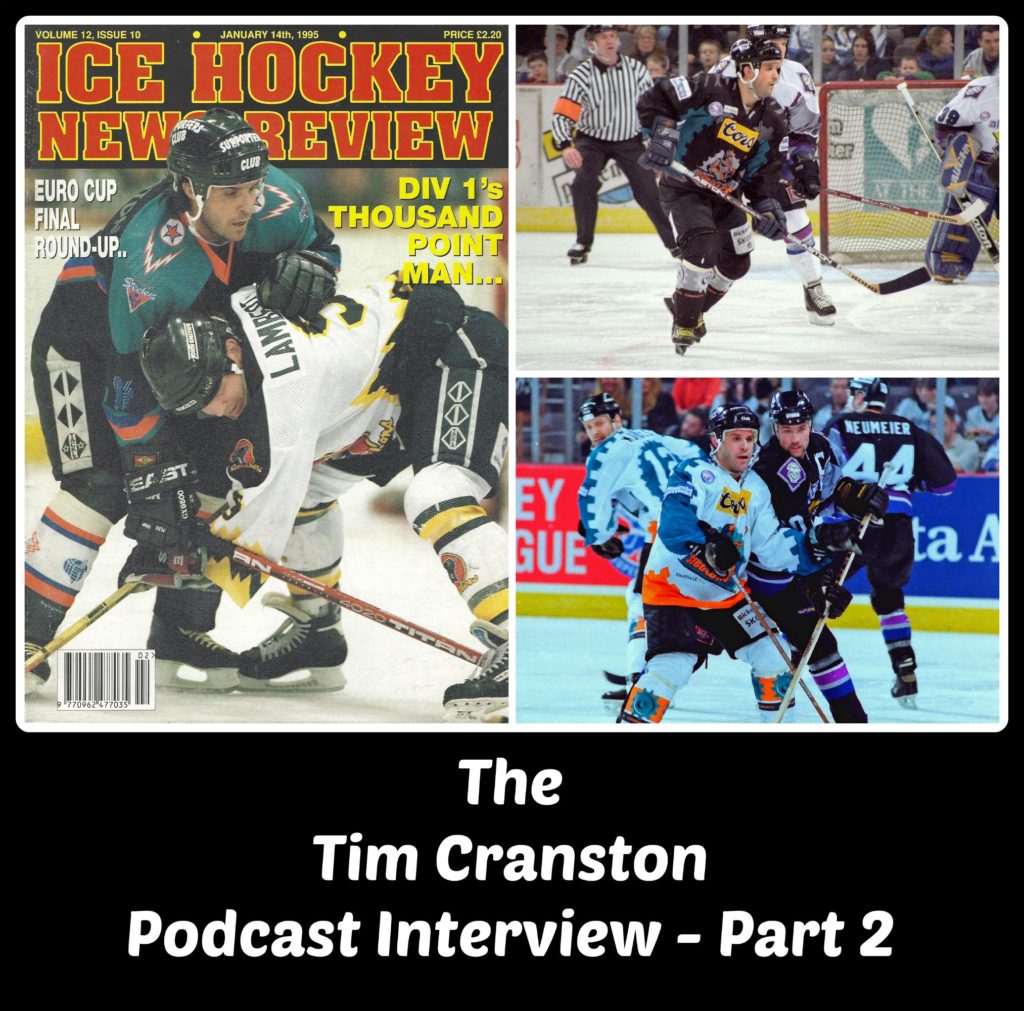 If you haven’t already listened to Part One, The Tim Cranston Interview – The Early Years, you’ll enjoy this episode that much more.

Tim jumped at the chance and made Sheffield his home for the next 5 seasons. At the same time he continued his law degree studies. He decided to continue his law degree studies at York University, a round trip of approximately 112 miles.
He became an integral part of a Steelers team that was about to turn UK ice hockey on its head.
Although not everything went according to plan during that first season, the team suffering a devastating 12 – 1 Playoff final defeat to the Cardiff Devils.
Tim recalls:

After that devastating Wembley Playoff defeat
we were determined never
to let it happen again. 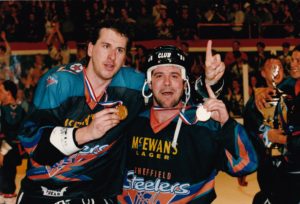 In Tim’s second season the Sheffield Steelers stunned the “old guard” by winning a League and Playoff Championship double. They first secured the League Championship on the ice of their fierce rivals, the Nottingham Panthers.

The team then gained Wembley revenge by defeating the previous season’s Playoff champions, the Cardiff Devils, in the semi finals.
The Steelers defeated the Edinburgh Racers 7 – 2 in the final to take their first Playoff Championship.

The following season was one that Tim, and everyone connected with the Steelers, would never forget.
First they beat arch rivals, the Nottingham Panthers, 5 – 2 in the Benson and Hedges Cup final. They then won the League Championship, finishing 4 points ahead of second placed Cardiff Devils.
The Steelers completed the Grand Slam with a hard fought penalty shots Playoff Championship victory over the Nottingham Panthers.
Thus the Steelers joined the Durham Wasps and the Cardiff Devils as the only BHL teams to have completed the Grand Slam.

Tim won the Man of the Match award in all 3 of the Sheffield Steelers consecutive Wembley Playoff final appearances.

The 1996 – 97 season was a massive one for UK Ice Hockey. It was the start of the brand new SuperLeague. Despite the new league having unlimited imports, the Steelers retained Tim and the core of the previous season’s squad.
It was a good move, success again followed as the Steelers finished league runners up to the Cardiff Devils. Better was to follow in the Playoff final with a 3 – 1 victory over the Nottingham Panthers.
Tim’s final Steelers season ended in disappointment, for the first time in 4 seasons the team finished trophy-less. However, on a personal level Tim had passed his final exams and had qualified as a law professional. So, at the age of 36 and not getting any younger, Tim decided his ice hockey days were over. 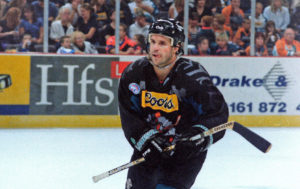 However that was not quite the end of Tim’s UK hockey career. His license to practise law in Canada was temporarily delayed. He now had a lot of spare time on his hands, plenty of spare time.
So when former Steelers team mate Scott Neil offered him a slot on his new team he immediately agreed. Ironically, as with his first UK team, his last UK team was also to be in Scotland. Tim played 17 games for the Edinburgh Capitals, scoring 10 goals and 9 assists.

You can also listen to Podcast interviews from Tim’s Alumni of former Sheffield Steelers players here: