Ed Courtenay, my guest for episode 9, is a former NHL goal scoring forward for the San Jose Sharks. In 1997 he iced for the SuperLeague’s  Sheffield Steelers, later moving to the Ayr Scottish Eagles.
After returning home to North America for 3 seasons he began a new UK adventure as a player-coach. The Belfast Giants were looking to replace outgoing coach Tony Hand and Ed fitted the bill perfectly.
He later moved on to enjoy a season each with the Newcastle Vipers and the Manchester Phoenix. 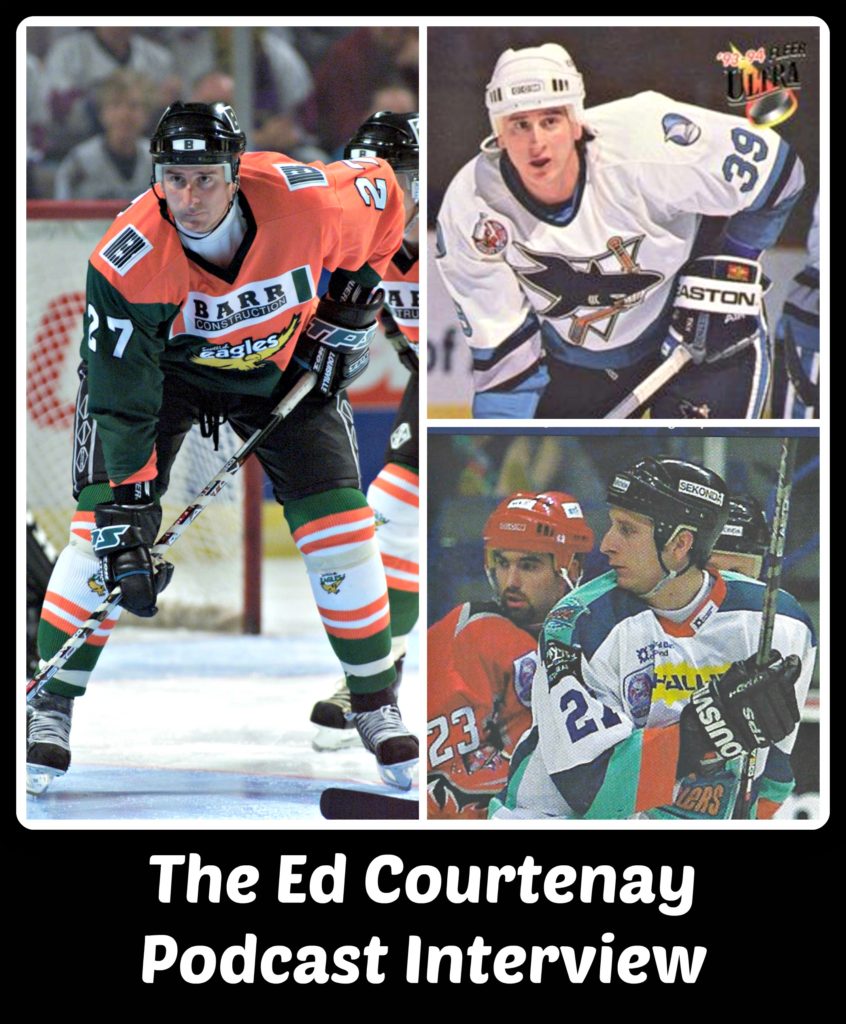 Montreal born Ed was disappointed when he wasn’t selected for the NHL draft. His only chance to make “the show” was to be invited to an NHL training camp.
That’s when lady luck took a hand.
During a junior hockey game the Minnesota North Stars came to checkout another player and discovered Ed instead, he explains;

Minnesota had come to scout
another player, I scored 5 goals and they noticed me.
They probably didn’t even know my name but I was
invited to their training camp.

Ed did well, as a result he signed a contract with the North Stars. Unfortunately he was never given the chance to ice for them. He was assigned to their IHL affiliate, the Kalamazoo Wings, and posted a respectable 124 points in 2 seasons.
It was to be another season and another NHL team that saw him finally make his NHL debut. 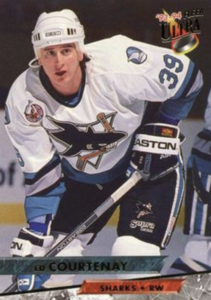 In 1991 the San Jose Sharks became the newest franchise in the NHL. The new team had ownership connections with the Minnesota North Stars and did a deal with  the NHL governors.This deal allowed the Sharks to choose half of the North Stars roster in a dispersal draft.
So Ed became a Shark, joined his new team and moved to San Jose in California.
That season Ed played just 5 NHL games with zero points. However the following season he played 39 games, scored 7 goals and had 13 assists.
His very first NHL goal came against his home town team, in Montreal, against the Canadiens, he recalls;

It was a big occasion for me,
I’d spent a fortune on tickets for family and friends
and it was a fantastic feeling to score,
but I couldn’t celebrate – we were 0 – 8 down!

The 1992 – 93 season was to be Ed’s last playing in the NHL. He was assigned to “the minors”. After 4 seasons playing with various teams in the IHL and ECHL it was time for a change.
Cue the Sheffield Steelers and the persistence of a certain David Simms. 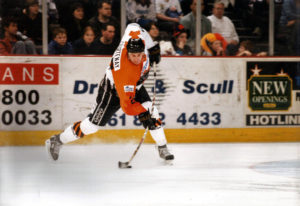 It was September 1997, Ed arrived in Sheffield and was immediately impressed with the Sheffield Arena and the Steelers fans. Ed had signed a 3 year contract and was looking  forward to good times. He’d joined a talented team which included Tony Hand, Ken Priestlay, Scott Allison, Corey Beaulieu, Mike Ware and Tim Cranston.
However that season the Steelers could only finish 6th in the league. More concerning to the club, for the first time in many seasons they were trophyless.
Ed’s second season followed a similar path. Even new head coach, Canadian Don McKee, couldn’t improve on their previous season’s 6th place finish.
The one bright point of their season was winning the Challenge Cup, beating the Nottingham Panthers 4 – 0.

With coach Mike Blaisdell replacing Don McKee early in his third and final season the Steelers gradually improved. Ed finished as top league goal and points scorer and was voted SuperLeague Player of the Season.
The team finished as league runners up, 4 points behind the Champions, Dave Whistle’s Bracknell Bees. They retained the Challenge Cup by, once again, beating the Nottingham Panthers. They also made the semi finals of both the Benson and Hedges Cup and the SuperLeague play offs. 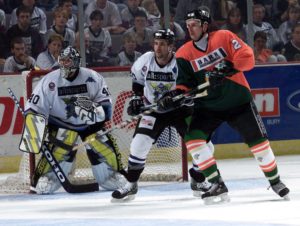 Ed then moved on to sign a 2 year contract with the Ayr Scottish Eagles. He joined his good friend and former Steelers team mate Tony Hand.
Ed’s second season in Ayr saw the team finish as League runners up and SuperLeague Play Off semi finalists.

That season Ayr had fought their way through to the Challenge cup final but were faced with a daunting challenge. The cup final had been scheduled to be played at the Odyssey Arena in Belfast. The one problem there was that it was the home ice of their cup final opponents, the Belfast Giants!
The Giants had already won the league by a canter and were a formidable opponent.
Ed recalls the occasion;

They were a really good team and hadn’t lost at home all season.
We went to their game the night before, they beat Nottingham in front of a packed arena.
Anyway we jumped into an early 2 or 3 goal lead in the 1st period,
they looked tired, we held onto the lead
and we deserved to win the cup

The Scottish Eagles 5 – 0 victory shocked the Giants and above all, the rest of the Elite League.

On leaving Ayr Ed spent the next 3 seasons back in North America, he thought his UK adventure was over. However, his good friend Tony Hand had other ideas.
Tony had just finished a season as the Giants player-coach and had decided to return back to Scotland. The Belfast Giants needed to find a replacement, Tony recommended Ed for the job and so Ed’s UK adventure continued. 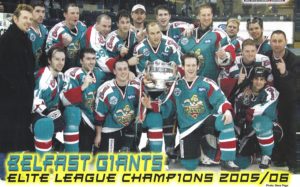 In his first season as player-coach he lead the team to an Elite League Championship title. The club had managed to secure the signing of former NHL star forward Theo Fleury. It was a smart move as Theo became the engine of the team, driving them on to the league championship.
However it was by no means a one man team. The Giants had talent aplenty with Mike Minard, George Awada, Curtis Huppe and Todd Kelman also in their squad.
The following season the team led the league for most of the season only to be pipped at the post by the Coventry Blaze.

His 3rd season in Belfast was less successful, his contract was up and so he chose to move on. As a result he signed with another former team mate, Rob Wilson and the Newcastle Vipers.
The following season he rejoined close friend Tony Hand as a player and assistant coach for the Manchester Phoenix.
He retired at the end of the 2009 – 10 season and is now enjoying life with his wife and kids at his home in Charleston, South Carolina.

Thanks for the memories Ed.

Today’s shout out goes to;
Mark Easton.
Edinburgh based Mark interviews former Murrayfield Racers and Edinburgh Capitals players for his Blog,
“Easty Catches up with”
This link with take you directly to it:  Easty catches up with…..
It’s well worth checking out.