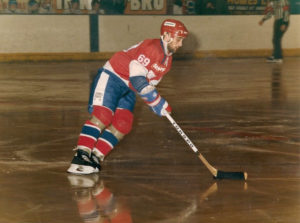 We talk of his early years in Edinburgh, where going to the Murrayfield rink was simply a “way of life”.
We talk of how he made his way through the junior ice hockey teams before making his senior Racers debut.
Paul’s first appearance for the 1st team was on the giant ice surface at Glasgow’s Crossmyloof ice rink.

I asked Paul who the biggest ice hockey influence of his career was, without any hesitation he replied ‘Alex Dampier‘.
He tells of how, one day, Canadian Alex simply walked into the rink, introduced himself and took over!
He put on a pair of skates and simply went about restructuring the whole set up. Looking back on the success the team had with Alex in charge, it’s clear that Damp’s did a great job. 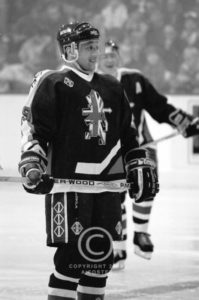 We talk of the success that followed with Northern League and Autumn Cup successes and Wembley playoff appearances.
It wasn’t long before Paul was noticed by English teams who tempted him over the border with big money offers.

Over the border – Solihull

His first move saw him “test the water” playing just 10 games for the Solihull Barons before returning to Murrayfield.
It was a good return move as he became part of the Racers very first League Championship winning team.
The next three seasons the Racers won another League championship and made several trips to the Wembley Play Off finals.
We discuss Paul’s “Wembley experience” in great detail.

Over the border – Peterborough

At the beginning of the 1989 – 90 season the Peterborough Pirates made Paul a financial offer he couldn’t refuse, however the club’s unstable financial affairs meant that after only 28 league and cup games he once more returned to Scotland.

This time, he signed for the Racers arch rivals, Fife Flyers the move angered both Racers and Flyers fans alike.
We talk of his time as a Flyer and how he was booed off the ice by his own Fife fans, simply for protecting one of his team mates. 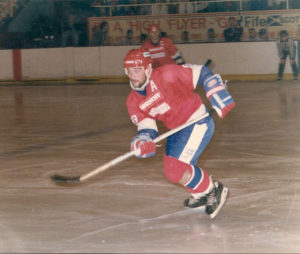 We also talk of his time with the Paisley Pirates as both player and player coach, the latter position he vowed never to do again.

I asked Paul if he’d ever played against brother Tony Hand and if so, how did he defend against him. I also asked how he felt about being in the shadow of Tony, who was, without a doubt, the finest ice hockey player this country has ever produced.

My first Shout Out shout goes to Paul’s brother, Tony Hand, who has just been inducted into the IIHF (International Ice Hockey Federation) Hockey Hall of Fame.
I’m sure that this would have happened some time ago, had Tony not carried on playing until he was 49!

My second Shout Out goes to David “Stef” Litchfield, Stef has been the Nottingham Panthers announcer for the last 18 years – ever since the previous announcer was knocked senseless by a flying ice hockey puck – courtesy of former Panthers D-Man, Chuck Taylor‘s errant clearance.