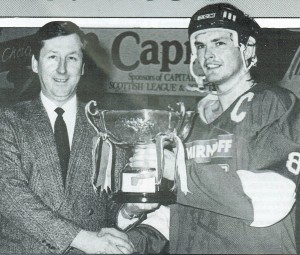 Cup winner for the Racers

Edinburgh born, Scott’s earliest memories of ice hockey was as a twelve year old playing “stick and puck” after a Murrayfield Racers game. Two years later he had put all of his other sporting interests aside and quickly made up for lost time,
By the age of just 16 he had scored his first goal for the first team Murrayfield Racers.

Scott adapted quickly to the requirements of Ice Hockey, playing for both the second string Raiders and first team Racers. His excellent fitness and skating ability helped his development so much so that by the age of 17 he’d made his Great Britain International debut.
Scott played 37 times for his country, appeared in six World Championships and an Olympic Qualifying competition, scoring 23 goals. and 35 points.

The man responsible for the Racers development and transformation into a success team was their Canadian coach Alex Dampier.
It was through Alex that Scott had the opportunity to play University Hockey at Prince Edward Island in Canada.
Alex had played there previously and had a coaching contact on the Island. Scott’s application was accepted and he spent the next 4 years in Canada. 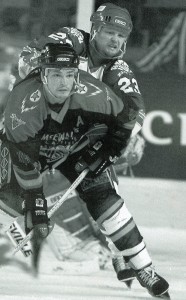 On ice action for the Steelers

However by 1992 the tide had turned for the Racers, following a poor (by their standards) season they were under new ownership and Scott decided it was time for a change.
Having politely rejected an offer from arch Murrayfield rivals, the Fife Flyers, Scott made the decision to move south, over the Scottish border to join life long friend Ronnie Wood in South Yorkshire and become part of the new Sheffield Steelers franchise.

Scott joined a Steelers team determined to be successful and with team mates of the calibre of Ron Shudra, Ken Priestlay, Jamie Leach, Selmar Odelein, Les Millie, Nicky Chinn, Tommy Plommer, Wayne Cowley and later on, his cousin, Tony Hand, he enjoyed 5 very successful seasons, winning more Championships and Wembley Play Off finals before returning home to Scotland in 1997 to join the Murrayfield Royals BNL team.
The following season the team became the Edinburgh Capitals with Scott as a player and General Manager, however it wasn’t long before he finally decided to hang up his skates in order to give the GM role his full attention. Later he became Head Coach and finally took over the club as Franchise owner. 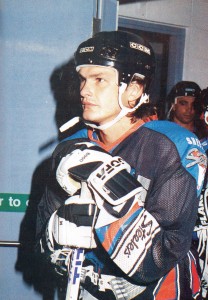 In 2004 Scott took the club up to the Elite League from the BNL, where they remain today.

Fast forward to the present day and Scott talks about his current position as owner of the Elite League Edinburgh Capitals, the current import situation within the Elite League and the difficulties of promoting local talent from the club’s junior development system to the senior Elite League team.

I also ask Scott’s opinion on reducing the number of imports within the Elite League and of the advantages of building UK Hockey from the bottom up, the exact opposite as it is today.

We conclude an enjoyable interview with my very best wishes for the new season, except when the Capitals play the Nottingham Panthers, of course.

On today’s show I give a shout out to Coventry Blaze fan and blog writer, Craig Summerton for his Blog post “Nothing but good coverage of UK Ice Hockey”
In the article Craig highlights just how quickly UK Ice Hockey fans have taken to Social Media to showcase and air views and opinions of their own UK Ice Hockey team and, of course, comment on other teams too.
He particularly gives mention to some of my own favourite Podcasts, such as:

It’s an excellent read complete with links to Podcasts (including this one) and blog posts etc.

Nothing but good coverage of UK Ice Hockey.

“Just discovered your Podcast and have binged on it over the weekend, absolutely love it.
Keep up the good work, how about having Mike Rowe and Martin King on the show”

Lastly, I reveal my guest for the next Podcast.
In episode 24, I’ll be talking to a former prolific Canadian goal scorer, who coincidentally, just happened to wear the number 24 jersey.
Want to know who  I’m talking about?
Well, I guess you’re just going to have to listen to this Podcast episode.