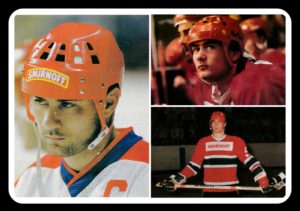 This episode will be my FIFTIETH EPISODE, that’s half a Century of Old Time Hockey UK Podcasts.

For this Special Episode I wanted my guest to be someone who’s left a real mark on UK Ice Hockey. Someone who has devoted almost his whole life in UK Hockey. 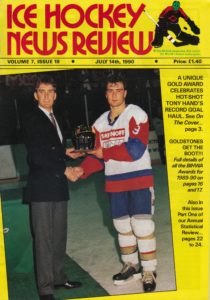 To me there was only one person and that person is the Legend that is Tony Hand
Described as “the Greatest Ever British born player” Tony had 14 seasons with the Murrayfield Racers.
In 1985 Tony became the first UK born player to be drafted by an NHL team. He was chosen by the then Stanley Cup champions, the Edmonton Oilers

When the Racers folded at the end of the 1994-95 season Tony was left without a team. Despite a very lucrative offer from the Fife Flyers Tony made the decision to move south.
That summer Tony, with his family, moved to England and to South Yorkshire where he signed for the Sheffield Steelers.
The previous season the Steelers had won the League title and Playoff Championship “double” and were determined to go one better.
Tony joined a team full of top calibre players including new signings Nicky Chinn, Wayne Cowley and Andre Malo to add to the likes of Ken Priestlay, Ron Shudra, Scott Neil, Tommy Plommer and Les Millie.
It was a good move for Tony as the Steelers went on to win the League Championship, Benson & Hedges Cup and the Wembley Playoff final to claim UK Hockey’s Grand Slam.

He stayed in Sheffield for 4 years before returning to Scotland, when, in 1999, he signed for the Ayr Scottish Eagles.
In 2001 Tony moved on to become Player Coach of the Dundee Stars. In both his and the teams first season he lead them to a BNL League Championship. 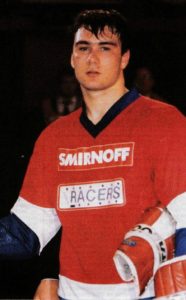 He later went on to enjoy similar roles with the Edinburgh Capitals, Belfast Giants and Manchester Phoenix.
His playing career has seen him play in over 1800 league and cup games.

Tony has lived and breathed ice hockey in the UK for virtually all of his life. When not involved in coaching he has worked promoting products for equipment suppliers Bauer Hockey and Warrior Hockey.

In the Spring of this year (2018) it was announced that Tony’s first club, the Murrayfield Racers had reformed.
It was absolutely no surprise to find that Tony has been instrumental in the team’s resurrection.
The “New Racers” will play in the Scottish National League (SNL) from the start of the 2018 – 19 season. The team will also compete in the

National Ice Hockey League (NIHL) North Cup, competing against the Solway Sharks, Billingham Stars, Blackburn Hawks, Hull Pirates, Sheffield Steeldogs and Telford Tigers.
However the club’s ultimate aim is to gain a place in the Elite League and once again become a major force amongst the top teams in the UK.

Today’s Shout out goes to my latest Patreon Patron, Jim Murden, thanks Jim.

So, once again a very BIG thank you to all of my Patrons, to  Jeff Povey, Oscar Brownsword, Colin Dunn, Chris Saddington, Tony Harrison and Tommy Boll for their continued support.
It really is very much appreciated.