André Malo is today’s hockey hero from the past.
He first arrived from Canada in the fall of 1986 when he spent a season with the Ayr Bruins.
In total André had a career that spanned 15 seasons in the UK. He went on to ice for the Cleveland Bombers, Nottingham Panthers, Sheffield Steelers and the Newcastle Vipers.
After gaining his British passport in 1993 he proudly represented the UK, playing 32 times for the senior team. 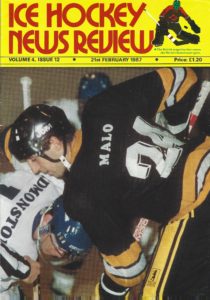 The Bruins had appointed Ian Mills, a Canadian coach, for the new 1986 – 87 season. Mills brought with him d-man André and forwards Luc Chabot and Kevin Reynolds. Chabot was a prolific goal scorer with Reynolds the provider, for a d-man André had a good scoring record too.
However within weeks André’s fellow Canadian team mates had been replaced as coach Mills moved to a more defensive style. New d-man Wayne Bartley came in together with right winger Cam Douglas.

It was a season of ups and downs for the Bruins, their lack of consistency dictating.
The team did manage to claim the 6th and final playoff position but behind the scenes all was not well.
Coach Mills left the club just before the playoffs, Ayr legend, Jackson McBride returned to the bench to replace him..

Bruins fans looked forward to the team having a successful playoff run. In their Playoff Quarter Final group they faced fierce rivals, the Dundee Rockets and the Fife Flyers. However, almost immediately, they were to be disappointed. With André suspended for the first 2 games, the team suffered 2 large defeats away at Fife and Dundee.
The team rallied and beat Dundee, however they needed to also beat Fife by 15 clear goals to make Wembley.
They failed.

Ayr return or not!

André had agreed to return to Ayr for the following season, but during the summer things changed, he explains;

I received a call from Ayr in late June or early July
telling me they had decided to go in a different direction.
That left it a bit late for me as most teams had already completed their rosters.

Soon after John Hutchings, coach of the Cleveland Bombers, offered him a slot on his team which André accepted.
He didn’t know it then but it was to change his life completely. 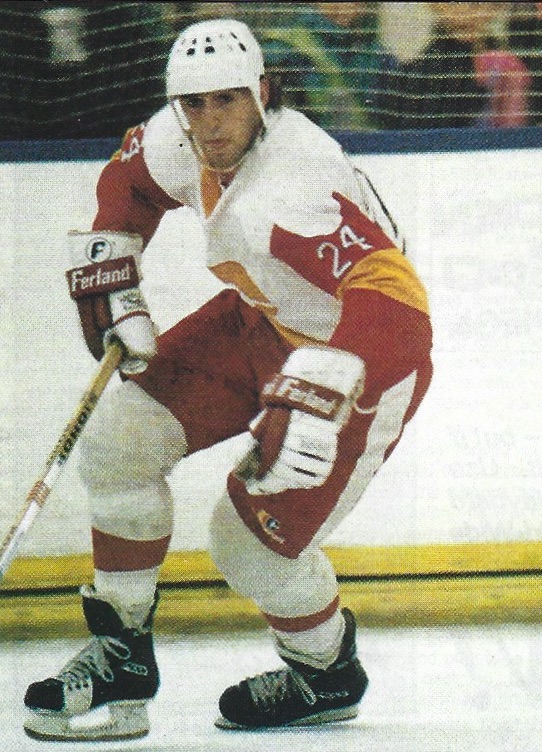 The Bombers had been relegated the previous season and were looking to regroup. It almost worked, the team finishing 3 points clear to top their
Division 1 North group.
In the Playoff Championship final they faced the Division 1 South winners, the Telford Tigers. Sadly it was not be, the team lost both home and away to a stronger opponent.

André returned to the Bombers for the following season, unfortunately the team finished 5th, the team’s worst league position ever. This gave the club the shake up it needed,

The management invested heavily in the team and the rewards were almost instant.
André accepted a new 3 year contract and also stepped up as player-coach.
Forwards Kevin Conway and Tim Cranston were brought in to score goals which they did in abundance. Conway scoring 107 times and Cranston 91 times.
The team finished as runners up in Division 1 and then had to fight for promotion in the Playoffs.
Despite a defeat and a draw in their first 2 playoff games the team rallied. They won the next 4 games to top the group and win promotion.
Conway and Cranston outscored all others in their group while André marshalled his D to concede 20 less goals than the other teams.
André’s first coaching season was a big success.

During the summer André had stepped down as player-coach and now lead the team as captain.
Promoted teams always found it difficult to retain their Premier Division place. Most ended up being relegated the following season. This trend continued as the Bombers, despite retaining the previous season’s roster, finished 2nd from bottom.
The team now had to face a relegation /promotion playoff.
Unfortunately the team’s Playoff results were poor and they were relegated. 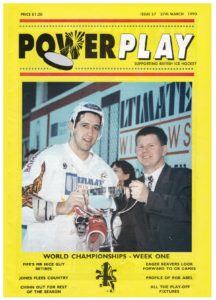 However, this time, fortune was to favour the Cleveland Bombers.
The Solihull Barons were forced to quit the Premier and the Bombers were invited to take their place, they accepted. Despite many struggles, André and his team were to remain in the Premier Division for the next 2 seasons.
André recalls;

We never reached the higher echelons of the Premier
but we did well on the resources we had.
Our team was one of unity, we worked hard and played hard,
we were together. 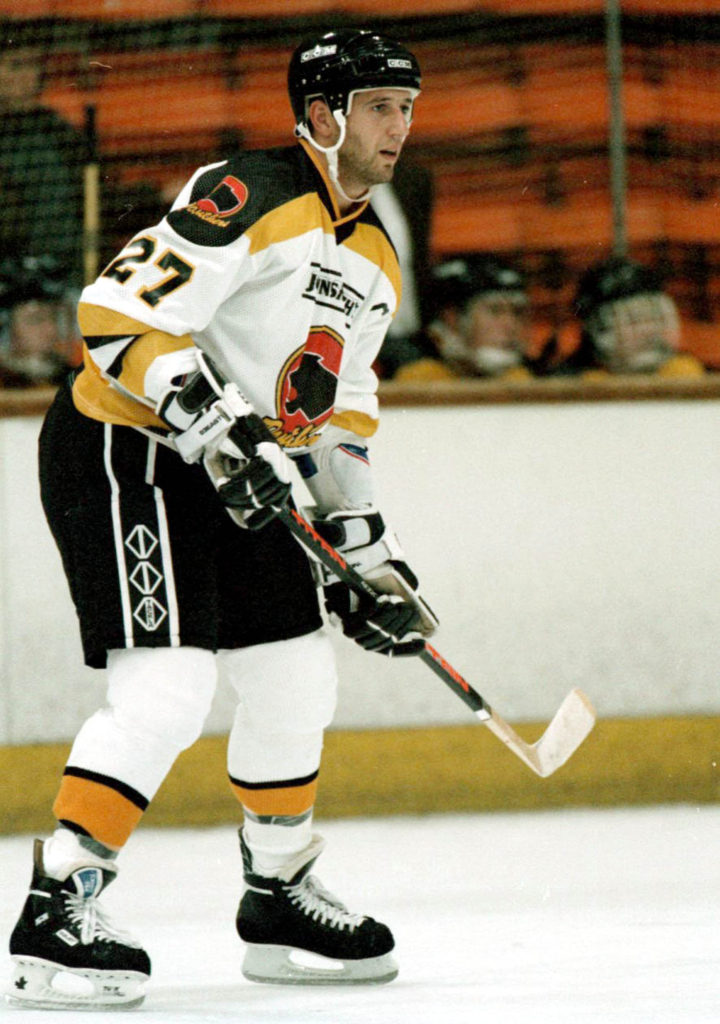 In the summer of 1993 André left the Bombers, accepting an offer from Mike Blaisdell to become a Nottingham Panther.
Early in the season André struggled to find form and feared he would be cut from the team.
Fortunately his form picked up and the team finished 3rd in the league and made the Wembley Playoff Finals weekend.

For many teams and fans the Wembley Playoff Weekend was one to celebrate and remember. That is unless you were a Nottingham Panthers fan on that particular weekend!
With hopes high, the Panthers took on the Sheffield Steelers in the second semi final. The victors would meet the Cardiff Devils the following day in the final. By the end of the 1st period the Steelers were 3 – 0 up, by the end of the 2nd they had doubled that lead. A Steelers 2 – 0 3rd period score saw Sheffield romp home 8 – 0, it had been a rout!
André recalls;

I think we kinda froze under the floodlights of that game,
we never came out of the blocks at all!

In another high scoring game, the Cardiff Devils became Grand Slam Champions when they defeated the Steelers 12 – 1 in the final.

Despite a Panthers offer for the following season, André decided to return to Stockton on Tees, now his permanent home. Once more he signed for the Bombers, now the Teeside Bombers.
André left the club early in the season due to the teams severe financial problems. The team eventually folded in January 1995.
A serious back injury didn’t help either and he was forced to return to Canada to undergo back surgery 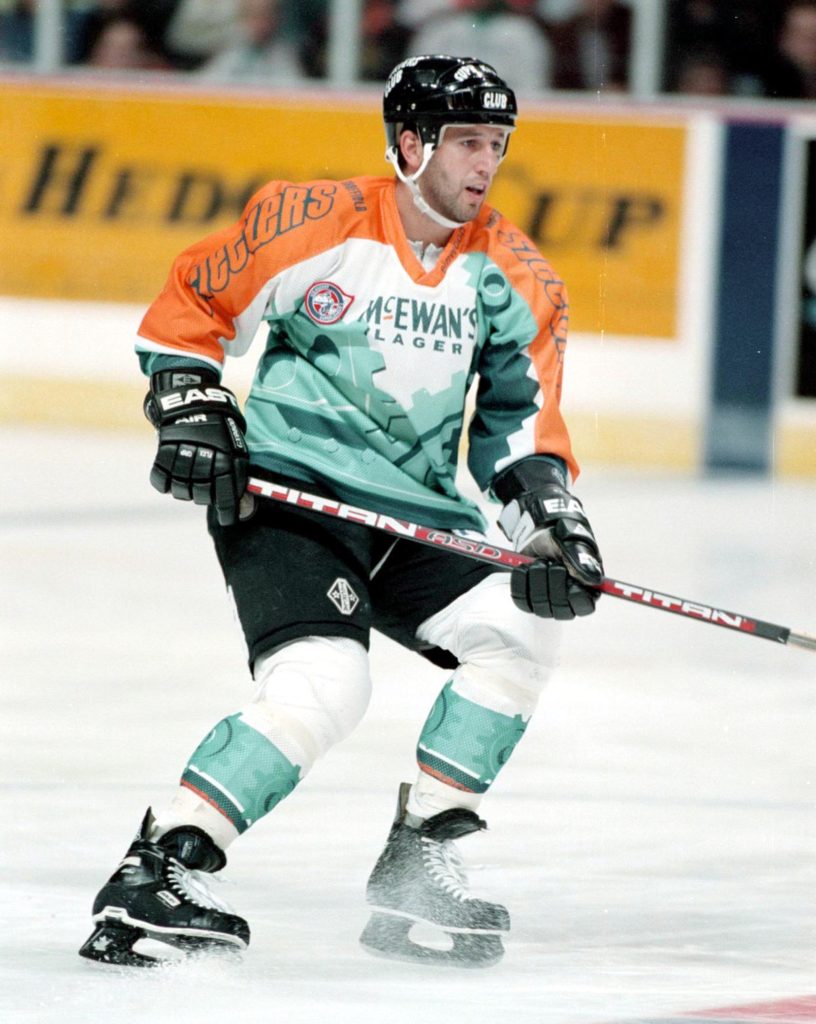 Although André had missed virtually all of the previous season, Sheffield Steelers coach Alex Dampier was keen for him to join his squad.
He followed a strict regime of exercise to build strength in his back. As a result, by the start of the new season, he was ready. All the hard work had paid off.
He joined up with a Steelers team bursting with talent with just one ambition, to win.
With the likes of Ron Shudra, Tony Hand, Nicky Chinn, Wayne Cowley, Ken Priestlay, Steve Nemeth, Tim Cranston and Tommy Plommer in the squad, they did win and often.
That season André became part of a Grand Slam winning team. First a 5 – 2 B & H Cup Final victory over the Nottingham Panthers, a League Championship followed. Then it was back to Wembley.

After a semi final penalty shot victory over the Cardiff Devils, the Steelers, once more, faced the Nottingham Panthers in a Cup Final.

Tragedy almost occurred for André and the team even before the game started. During the warm up period a shot from André broke goalie Wayne Cowleys finger, he recalls;

It was awful.
The biggest game of the year too.
I took a shot that hit him on the wrong side of his glove,
it split his finger.
Back in the dressing room he had an injection and went back out to play.

In the 1st period André scored the first goal of the final, against his old team. The period ended 2 – 0 and a goal 1.33 into the 2nd period had the Steelers cruising at 3 – 0. However the Panthers had other ideas. 3 quick goals in under 2 minutes saw the game tied at 3 each.

There were no goals in the 3rd period and overtime was also scoreless. The 1996 Wembley Playoff Final would be decided on penalty shots.

Maybe you could forgive the Steelers for being a little apprehensive. Remember, goalie Wayne Cowley in the Steelers net with a broken finger. Regular penalty taker, Canadian Steve Nemeth, was also out with an injured elbow, could things have gotten any worse?
And then coach Alex Dampier had to look for a replacement penalty shot taker.
André recalls;

Damps was looking around the bench,
we’re all looking away thinking please not me!
He then asks me if I fancy taking one.
I said yes provided I could go first, I went first
and fortunately I scored.

At the end of the 1999 – 2000 season André left the Sheffield Steelers and decided to retire. he did return to the ice several seasons later, signing again for Alex Dampier, this time coaching the Newcastle Vipers.
However age, injury and his new career as a teacher dictated that he lasted just 8 games before deciding to hang up his skates for good.

These days André lives with his family in Stockton on Tees, County Durham where he teaches and plays a really good game of golf.

Thanks for the memories André.

Andrew goes on to list  16 players He’d like to hear from, some of which I’m actually working on right now and some I’ve tried and failed and some, well…..
Let’s just leave it there!
So, Andrew, as I always say “Watch this Space”

You can also listen to Podcast interviews from André’s Alumni of former team mates here: